...it’s important to understand that a lot of what we call leisure now is actually not leisure. It is unpaid labor on behalf of surveillance capitalism, what Shoshana Zuboff calls surveillance capitalism. That is, we are all working for Google, we are working for Facebook. I would like to spread a model of reading that is genuinely a leisure activity and that escapes the loop of being unpaid labor for surveillance capitalism. That will start small, and maybe it will stay small, but my hope is that it would be it would be bigger. Even people who have very hard, demanding lives can spend an enormous amount of time in this activity that we have been taught to feel is leisure, but is as I have said unpaid labor.

It’s interesting to see how things come into fashion. Think about how in the last few months we have decided that nothing is more important than the Post Office—that the Post Office is the greatest thing in the world. One of those bandwagons that I’ve been on for my entire life is libraries. I think libraries are just amazing. I grew up in a lower-middle-class, working class family. My father was in prison almost all of my childhood, and my mother worked long hours to try to keep us afloat. My grandmother was the one who took care of my sister and me, and we didn’t have much money for books. There were a lot of books in the house, but that was because members of my family would go to used bookshops and get these like ten cent used paperbacks that had been read ten times and had coffee spilled on them and so forth. So we spent massive amounts of time at the library. Once a week my grandmother and I would go to the library and come out with a great big bag full of books and we would just read relentlessly.

I’m the only person in my family who went beyond high school—in fact I’m the only person in my family to graduate from high school. Yet we read all the time. We always had a TV on in our house, but nobody ever watched it. A characteristic thing in my family would be me, my mother, my grandmother, my sister when she got old enough, sitting in a room with the TV on, the sound turned down, and we were all just sitting there reading books. That was everything to me. It opened the door for everything that I’ve done in the rest of my life. I owe so much to the city of Birmingham, Alabama’s, public libraries. I think when I was doing that I was simultaneously engaging in genuine leisure while also being formed as a thinker and as someone who could kind of step out of the flow of the moment and acquire perspective and tranquility. So I believe that I’m recommending something that is widely available, even to people who have very little money and very few resources, and I know that from my own childhood.

August 16, 2020
I am skeptical of attempts to center contemporary Christian conversations about race on New Testament texts purported to feature or critique racism. From what I can tell, this move is a common one. Pericopes adduced include Jesus's encounter with the Syro-Phoenician woman, his meeting with the Samaritan woman at the well, and the parable of the good Samaritan. Most often, however, I see writers, pastors, and preachers use the example of gentiles in the early Jewish church, deploying some combination of Acts 15, Ephesians 2, Galatians, and Romans in order to illustrate the ostensible overcoming of racism in the early Jesus movement as an abiding example for churches struggling with the same problem today. Why am I skeptical of this move? Let me try to spell out my reasons succinctly. 1.  Race is a modern construct. What we mean by "race" does not exist in the New Testament, either as a concept or as a narratively depicted phenomenon. 2. Racism, therefore, also does not exi
Read more

100 theologians before the 20th century

July 24, 2020
Earlier this summer I set myself the task of creating a list of 100 theologians before the 20th century. Partly for myself, since I'm an inveterate list-maker and lists help me organize my reading habits; in this case, I would see where my training had left gaps and blind spots that I needed to fill in. But partly, also, for my students, who regularly ask me who they should read from the tradition—not only where to start, but a kind of curriculum or "who's who." So I set out to answer that very question: who's who? The current list has 153 entries on it. I still want to cull it down to a clean 100, but I figured I would share it here in its unfinished, bloated form. I covet your corrections: Who am I missing? Who have I misnamed? Who is or is not a saint? Whose dates are mistaken? If you had to cull the list down to 100, which dozen (or more) figures would you nix? I've separated the list into four groups, ranging from 32 to 50 theologians per period: patrist
Read more 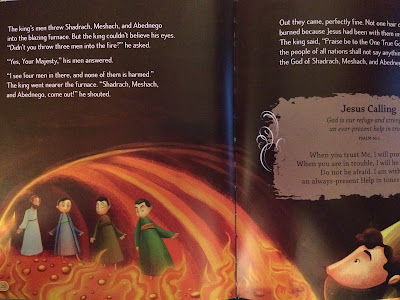 The two Bibles my wife and I read to our children are The Jesus Storybook Bible , written by Sally Lloyd-Jones and illustrated by Jago, and the Jesus Calling Bible Storybook , by Sarah Young. Their favorite story by far is "the Moses story" (a title I required instead of their original "the Pharaoh story"), which they quickly came to know like the back of their hand. One night, when I persuaded them to let me read them something other than the Moses story, we read the story of Shadrach, Meshach, and Abednego. To my delight, when we got to the part where the three were thrown into the fiery furnace, and "a fourth figure" was there with them, and none of them were burned by the fire, the text and illustration both delivered on the christological implications of the episode and drew the figural connection implicit within it. First, my children recognized the fourth figure as Jesus, for the simple reason that he is depicted exactly as he is later in t
Read more